Late October and early November 2010 was a time no one living in Yogyakarta, Indonesia, will ever forget. Mt. Merapi, one of the most active and dangerous volcanoes in the world just north of Yogyakarta, gave the performance of a lifetime – or as scientists proclaimed ‘a once-in-a-hundred-years eruption.’

People in the area were accustomed to Merapi throwing steam and smoke into the air on a regular basis. And scientists had often said that this activity released pressure, thereby avoiding huge eruptions. But scientists were sure that this eruption was going to be big, despite the continuous release of pressure.

Even before the eruption began, people who lived very close to the crater were moved to evacuation camps and were not allowed to bring more than they could carry. But in line with increasing awareness of the potential force of what was building up inside the volcano, the areas that needed to be evacuated moved further and further out.

I live on the slope of this volcano in what is considered a safe zone. I didn’t expect to have to evacuate even though ash had been falling regularly on my home and yard. But at the last minute, even residents of the safe zone had to evacuate. 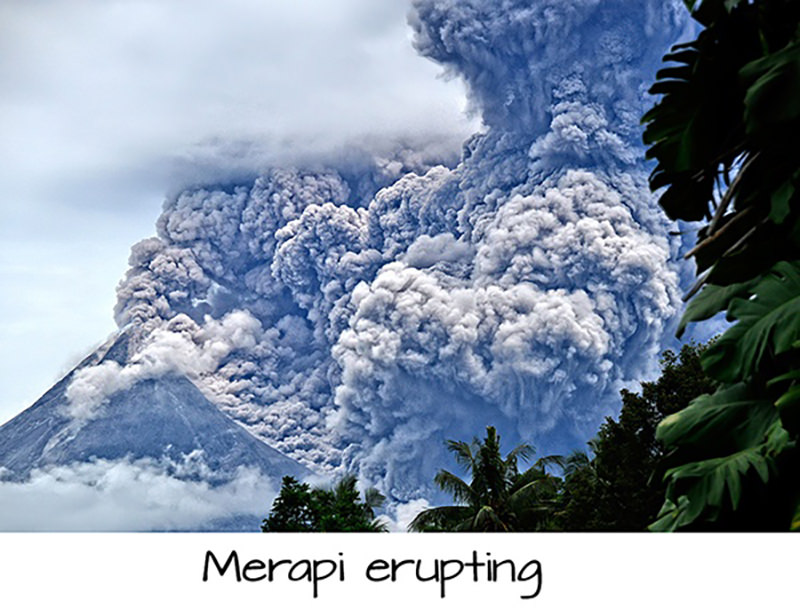 People living in my area didn’t suffer serious damage to their property. But many people who lived inside the usual evacuation zone lost everything as lava covered their homes, their animals, and anything else that they had been forced to leave behind.

As horrible as this disaster was, it actually ended up changing many lives for the better – not right away, but later.

But before we get to the rebirth part, you might be surprised to hear about how well the disaster was dealt with.

The Indonesian government set up 55 evacuation camps in and around Yogyakarta. They’d obviously been working on the plans and supplies for some time because no one ended up left to fend for himself. Some of the camps were indoors and some outdoors. They weren’t luxurious, but they were amazingly well designed and surprisingly comfortable.

Everyone received food and drink regularly. Each camp had a communal kitchen so that people could share cooking activities. In addition, soldiers came to the camps and entertained children. 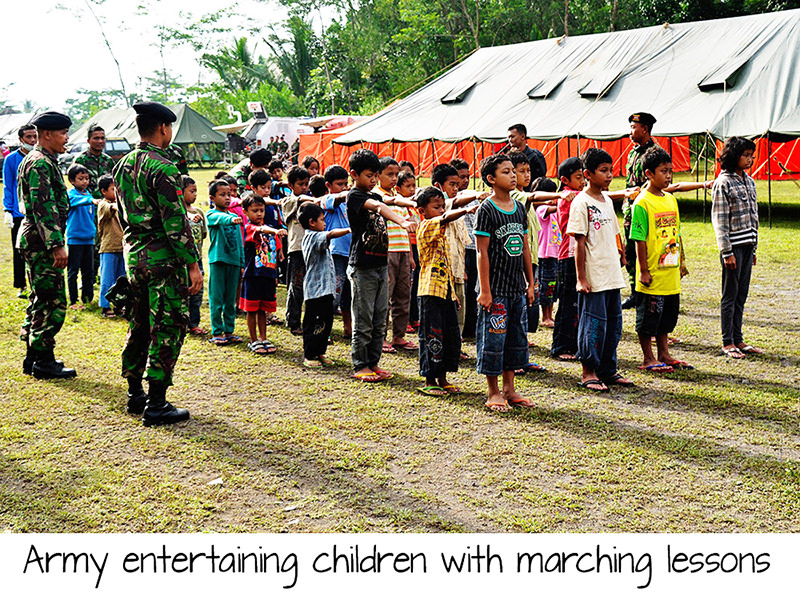 Volunteers also came to the camps to tutor children and spend time with adults who were succumbing to depression. Singers and artists visited camps to bring entertainment to evacuees who were still not sure where their lives were headed. Private companies even offered various types of training and courses, especially computer courses and automotive training.

Obviously, families were uprooted and in a state of bewilderment, but the government organized everything very well considering the unfortunate circumstances. 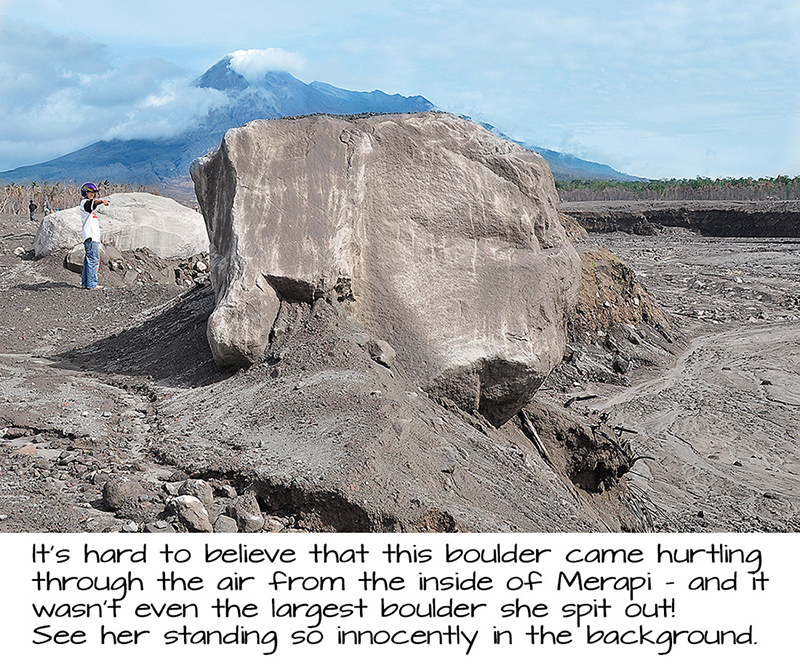 Basirun, one of the evacuees,  had a house which ended up completely buried under lava. He lost everything. But remember, I mentioned earlier that there was a silver lining. About four months after the eruption and evacuation, the government relocated him and his family to a temporary house, one of thousands of temporary homes that the Indonesian government had built quickly to accommodate evacuees.

Less than two years later, the government moved Basirun’s family into a permanent house along with other families from the same village. Basirun’s family and his entire village of 130 families ended up together in a small village, all living in homes that were actually better than the homes that had been destroyed.

People received compensation for their lost animals. Basirun and his friends bought a few cows and now sell the milk to a nearby cooperative.

People received training in new skills. Basirun’s wife Fitrah and her friends were trained to make crackers and other kinds of snacks. Today, Fitrah still makes crackers and snacks and runs a small store from their house, selling the products she makes herself, as well as sugar, rice, noodles, and eggs. 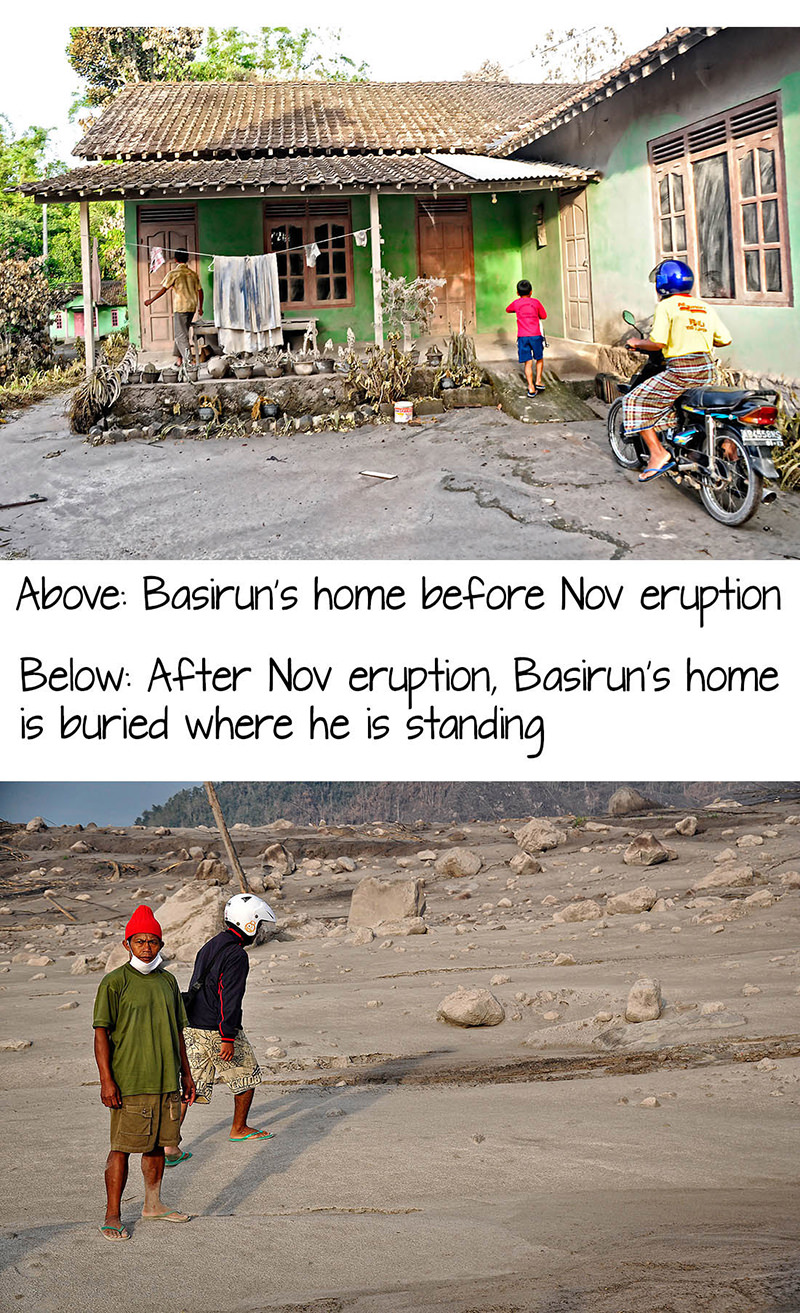 Basirun and Fitrah’s lives definitely improved in their new home, and the lava area became a tourist attraction with small stores lining the paths selling snacks, drinks, t-shirts, and more. Whenever I had visitors from overseas, taking them on the ‘lava tour’ was one of the highlights of their visit.

Long-term benefits of the eruption come from the sand that was spewed forth out of the depths of the volcano during the eruption. Indonesians say that the sand from the belly of Merapi is the best quality and most fertile in all of Indonesia.

As far as my situation, my housekeeper, my dogs, and I were out for 18 days. Luckily, a friend found an empty house in his neighborhood where we could stay. We went up to my house frequently to clean the ash which was mixed with sand and water, thereby making cement. The roof of my house would have caved in if we didn't remove that every couple of days because ash was falling most of the time we were gone.

We were lucky - no real damage to anyone's property in my neighborhood. But because the Indonesian government was so efficient, people who lost everything often ended up in better circumstances than before.