Should you be worried about danger when traveling? Don’t worry. Just be prepared, use your common sense, and follow the tips in this post.

As a tour director for 18 years and as a traveler for more years than I can remember, I’ve found myself and my tour members in vulnerable situations on occasion. Yes, I’ve fallen prey to tricksters that caused me a lot of grief at the moment, but luckily, I can look back now and laugh.

The reason I can laugh now is that the episodes only involved loss of my possessions. Physical harm was not part of the robber’s m.o. 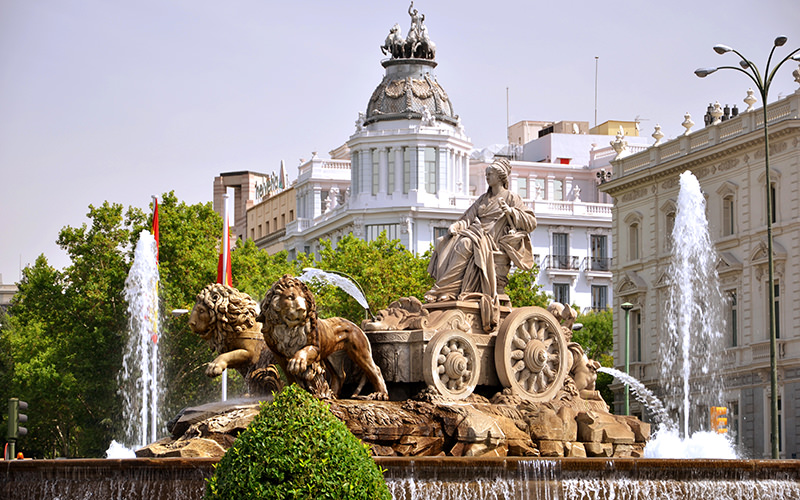 Imagine how I felt in the following situation.

Madrid is one of my favorite cities of the world, but like many cities, it has a reputation for robbing or scamming tourists. And that reputation is well deserved – at least, in my experience.

I don’t even have to look at my journal entries, and three times in Madrid pop into my brain when a robber attempted to relieve me of my money. The first time was successful, but I learned a little about the technique and was able to recognize it afterward before the next thief was successful.

So how did I end up at a police station in Madrid crying my eyes out?

I was walking along Calle de Bailén on my way to the Royal Palace. Madrid is usually full of people out walking, but this street was strangely empty on this day. That made my walk even more pleasant than usual. I wasn’t in any hurry and just casually strolled along.

Shortly after a lady passed by me, I felt a warm liquid hit my right shoulder. I looked back and a man pointed up to the trees, indicating that a bird had dropped a load on me.

I stopped and put my purse on the bench that was conveniently along the sidewalk. (In hindsight, I realize that the location had been carefully chosen.)

The woman ran back and gave me a tissue. Wasn’t she kind? Wrong! She then grabbed my purse and ran.

The man immediately took off after her. Wasn’t he kind to try to help me? Wrong again.

A car pulled up and stopped just long enough for the two to jump inside and then speed away.

You can imagine my shock. All my assumptions about the situation were so totally wrong.

I wasn’t a novice traveler even at that time many years ago. And I’m from Chicago, where danger supposedly lurks behind every corner.

Still, I was naïve enough to not recognize what was happening until the damage had already been done.

Have you ever been in a similar situation and been as naïve as me?

News flash – I was smarter the next times that something similar was about to happen. I’d learned that I needed to watch people more carefully, so when my traveling buddy Sarah and I were out in a crowded area, I recognized when a man and woman were planning to do something similar to Sarah and me. I was now an expert in the ways that thieves set up a situation.

Sarah had already heard the story about my naiveté, so when I pointed out how a man and woman who’d been walking together had split up but were still sending signals to each other, Sarah went right up to the guy and started spouting that she was going to call the police.

I don’t know if the guy understood English, but the word police seems to be universal.

Bam! They got away from us as quickly as they could. They’d probably never been confronted by a potential victim like that.

Here’s my point in telling you this. I don’t suggest you confront potential thieves like Sarah did. But being alert can give you the presence of mind to keep yourself and your possessions safe.

And of course, I’m going to share the tips I gave to my paying tour members. Just keep reading. 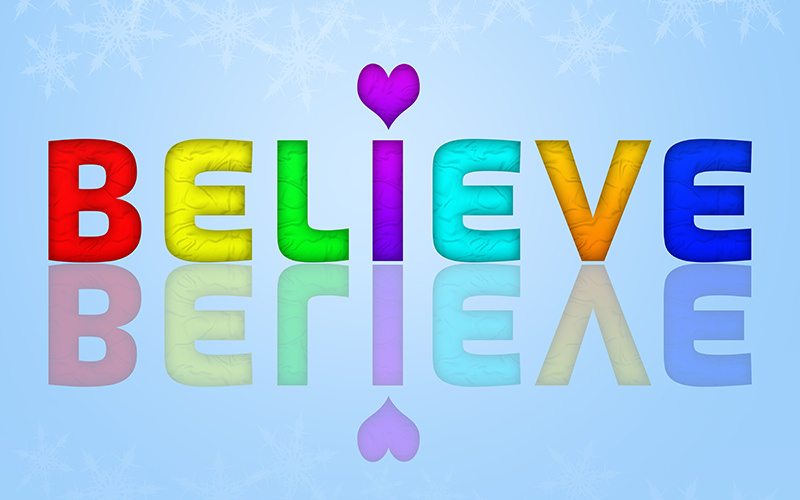 When you are traveling, it is important that you not stand out as a traveler. Acting like a tourist can make you a target for crime.

A simple fact of life is that many places, while depending on tourism for earning money, are full of people who dislike tourists. Actually, that’s not true. They love tourists, but for the wrong reasons.

As a tour director, I gave lots of tips to my paying tour members so that they wouldn’t suffer the same fate that I’d suffered that day in Madrid. You can have them for free. Just keep reading. 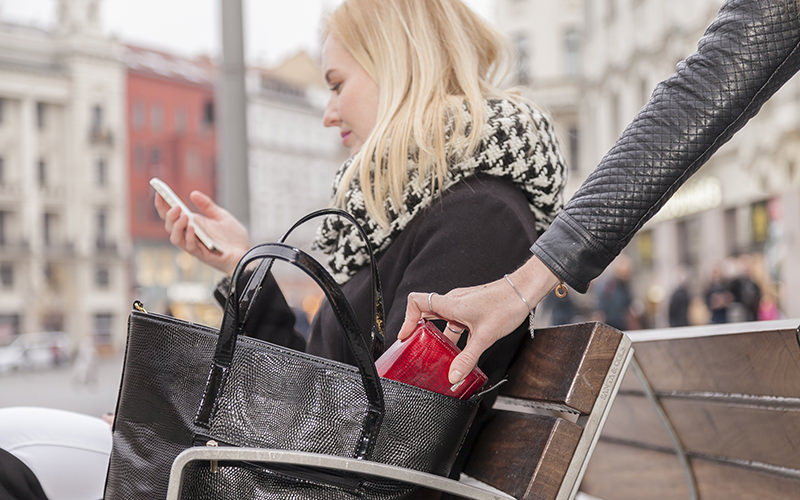 I promised to tell you about Len. His story isn’t a pleasant one but holds possible lessons for us all.

Len and Mary Jones from Seattle were on tour with me in St. Petersburg, Russia. They heard the same advice I gave on every tour about avoiding getting robbed. I even gave them written handouts with the same tips I’ve put in this post.

But like Bethany (remember her story about the fanny pack?), he chose not to follow the advice I’d given. Yes, I sometimes felt like I was talking for my own benefit. Still, I shared the information on the microphone and also game the information in writing, in case I’d put some people to sleep when I was talking.

One afternoon, I got a phone call from Len. Would I please come to his room? He sounded distraught so I wasn’t looking forward to what I was going to find out. 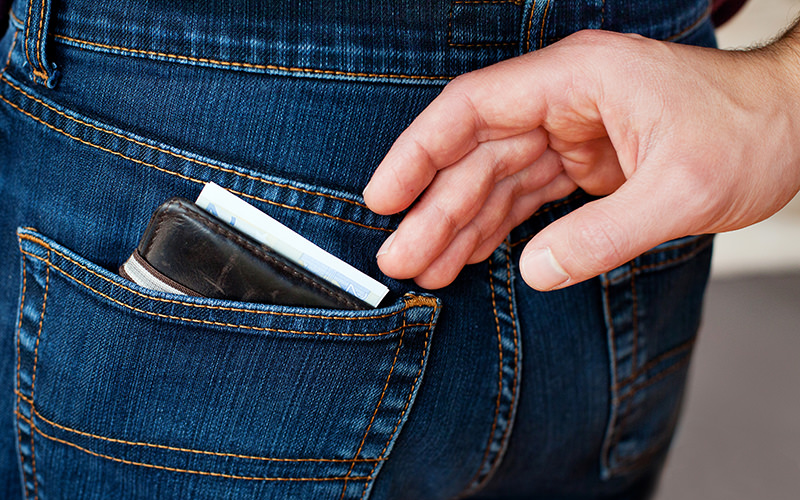 Yes, St. Petersburg, Russia, is another city that used to have a well-deserved reputation for pickpocketing. The situation has become better now that a school for children to learn pickpocketing has been closed down.

In any case, a clever thief made out very well when he picked Len’s wallet out of his back pocket. Len lost everything, except his passport. Mary still had her purse and her credit cards. Yes, she had all her cards in her purse, but because the card was tied to Len’s card, hers had to be canceled.

Unfortunately, Mary didn’t have any cash. Len had all of that in his wallet in his back pocket.

They soon learned that credit cards could not be replaced quickly. We still had several days on our trip, and then they were going to France for another week before returning home.

The credit card wouldn’t reach them in time to cover the rest of their trip, so I loaned them enough cash to last until they returned home.

Did Len learn this valuable lesson? I certainly hope so.

The U.S. Dept. of State issues warnings about the safety of traveling overseas.

What to Do – The Bottom Line

You might think that I could tell you many more stories about tour members of mine who were robbed. But I’m happy to say that’s not the case. I think most of my tour members paid attention to my advice and even followed it.

And even if they didn’t, please recognize that most travelers do not fall victim to thieves. You may think that the people I’ve mentioned in this article are probably a small portion of tour members who were robbed on my tours.

Not true! In my 18 years as a tour director who led hundreds of tours in many countries and had thousands of tour members, only six or seven were robbed. So you see – Len, Bethany, and Bob make up about 50% of the robberies I had to deal with over the years.

What does that tell you? Being alert and aware of the types of dangers that thieves pose is the best way to avoid becoming a victim.

But if you find yourself in a situation where you think you’re being set up to be robbed, MAKE NOISE. Thieves don’t like noise and will usually leave as quickly as possible.

Travel is a great pleasure. Enjoy it to the fullest. There will be up’s and down’s. And if one of the down’s happens to be getting pickpocketed at some point along the way, don’t let it ruin your whole trip.

Want to remember this? Save 'Secrets Smart Travelers Know to Stay Safe on the Road' to your favorite travel board on Pinterest.