I’ve thought a lot about death recently. My mom is 92 years old and has severe dementia. I realize that her time on earth is coming to an end.

I don’t think any of us like to think of our own death or the deaths of friends and family. But there’s a place in Indonesia that puts a new light on death and funerals – Tana Toraja, Sulawesi, Indonesia.

Around 90% of Indonesians are Muslim, but the people of Tana Toraja are Christian, and they don’t consider death to be a morbid affair. In fact, every funeral is a huge celebration of the dead person and what he or she did in life. The whole village participates in the lively affair that continues for days or weeks.

The people of Tana Toraja are very hard working throughout life – not because they want to buy lots of luxuries. No. They’re saving for their funeral. An extravagant funeral shows the person’s status to the world.

What if a person dies before he or his family have saved up enough money? In that case, the funeral will be delayed for however long it takes to save enough money for a great funeral. That could take months or even years.

Tourists are very welcome in Tana Toraja. The people there are happy to share their practice with strangers. So if this sounds interesting and you’re thinking about putting Indonesia on your bucket list, be sure to include Tana Toraja.

Is the Body Buried?

No. After the funeral, the body is put in a cave that’s located on a very high cliff. An effigy carved in wood is mounted outside on the wall of the cave.

And here’s the really surprising part. The bodies are brought down from the cave in August every year.

So now you’re probably wondering why they do that. Each exhumed body gets washed, groomed, and dressed in new clothing. Then relatives walk the bodies around the village before returning them to their final resting place in the cave. 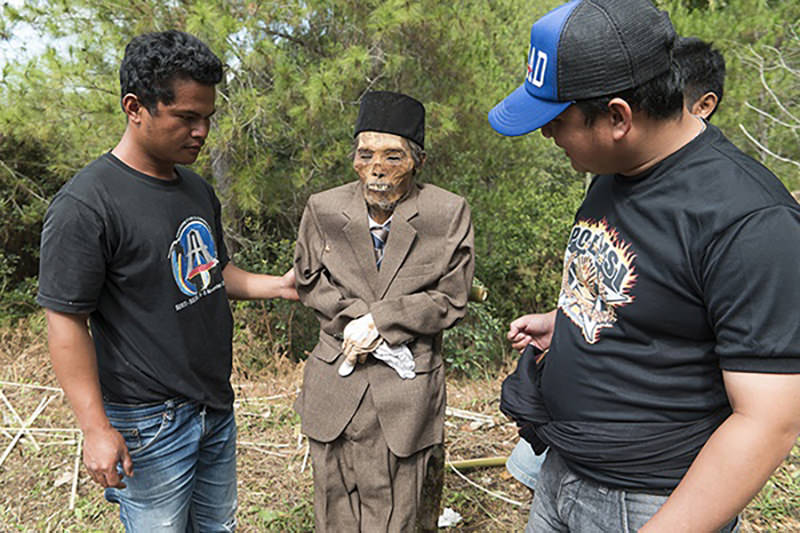 Want to remember this? Save 'When Death Isn't Goodbye' to your favorite travel board on Pinterest.